In some respects Oil & Gas companies are the opposite of banks. Usually they have large amounts of money fixed in all kinds of assets and their equity is mostly over 25% of their total assets. This means Oil & Gas companies  won’t have the “deep” buildings we saw for the banks in our spatial graphs.

On the other hand, the industry had its own crisis: the sudden drop of the oil price. If we look at the graph of the oil-price in time, it looks more or less like this: 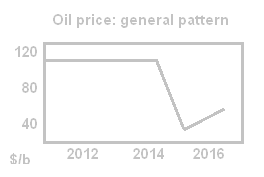 Before 2014 everything seemed to be fine, but after 2014 the world was gloomy. That’s why 2013 and 2015 are interesting years to look at balance and profit & loss of some companies in the industry. We took four – headquartered in USA and Europe (UK, Netherlands and France): ExxonMobil, BP, Royal Dutch Shell and Total.

The input-file looks like this (remember – all amounts represent millions, so the actual amounts are mostly billions!):

After starting the generator (the .jar-file) and selecting the input- & output-files, the graph was generated. The first impression is nice. In the front (2013) large towers with thick green roofs). Completely different from the corridor-like buildings representing banks.

Even in 2015, although BP showing a red roof (loss) and the buildings being lower and narrower (less equity), they don’t look like banks. However, the buildings in the front – representing 2013 – are much higher than the ones in the second row, representing 2015. It’s certainly not the perspective fooling us! In 2015 the roofs are still green, except for BP, but thinner than  before. Looking from above we can see the companies actually shrunk!

Of course our message is not about banks or Oil&Gas companies, but about the powerful spatial graphs, generated by AnRep3D.

For those who want to see the real 3D graph and manipulate it themselves, the link is here. Click and hold to tilt and rotate the graph. Double click to translate the graph. Right-click and move to zoom.

AnRep3D is the new company, founded after the handover of Scientassist (together with VRBI) to one of my sons. From now I will focus on three-dimensional graphs for the financial markets, showing the main figures from annual reports in comparison. As per 2021 a second product is available: EnRep3D. It is meant to visualise energy. Although the engine is the same, the texts, manual, website and examples (including blogposts) are focused at energy.
View all posts by AnRep3D →
This entry was posted in Visualising Financial Information and tagged 3D, Annual Report, Assets, Companies, Equity, Fundamental Analysis, Industries, Liabilities, Oil&Gas, Oil-price, Profit, Revenue, Spatial graph, Stock Market, Virtual Reality, Visual Mining, Visualisation. Bookmark the permalink.