Visualising a mix of companies in a spatial graph (III)

Before we talk about the graph, let me tell you the actual spatial graph I am talking about is available at our AnRep3D website: http://graphs.anrep3d.com/smallmix.htm  Any modern browser with WebGL enabled will show this X3DOM-based graph, which actually is just a webpage. We will show some screenshots for people who are not able to look at the graph for whatever reason, but if possible, keep the original graph at hand.

The distance between the “buildings” was increased, because after the correction of the values for Easyjet and Elecnor the buildings became narrower and extra space had to be created for the labels. As a result, the graph is further away, more in the background.

By clicking the right mouse-button and moving down at the same time, the graph will come closer.

To re-adjust the position of the graph in the screen, double-click in the graph. When clicking in the middle of the Elecnor-building, the graph will move up because now Elecnor was selected as the new centre. Click on USG-People and the graph will move to the left. Remember: when the graph is in a very strange position, click the refresh-button to reload the page and the original position will be shown again.

To be able to see equity and assets at the same time, we have to look at the top of the building (or the bottom). The graph can be tilted easily by clicking the left mouse-button and moving the mouse downward (or upward) at the same time. Using the middle of Elecnor to click at will keep the graph aligned horizontally.

Now it’s time to have a closer look at the companies. Zalando doesn’t have a lot of debt: the building is not much deeper than its width – not even two times. As the equity (width) is part of the total assets (depth), the extra part represents the debt.

For Tesla it’s completely different: the debt is probably five times as high as the equity, so the equity ratio is rather low but the company still doesn’t look like a bank! (see previous post about Dutch banks).

Looking at their revenues, the difference is small, but Tesla manages to lose a lot of money, while Zalando makes a small profit. 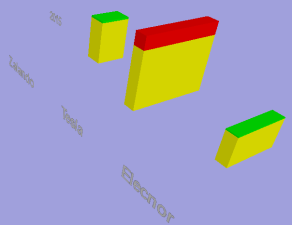 Comparing Elecnor to Tesla, we see it has more or less the same shape, so a rather high debt as well. The revenue is only half as high as Tesla’s but there is some profit after all. Of course their business-models are very different. Tesla will spend a lot of money at R&D without caring about profit in the short term. 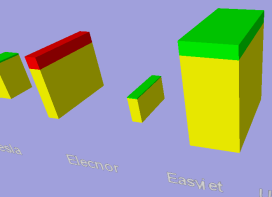 Easyjet is surprising. To generate a revenue in the same magnitude as Tesla, they need much more money, because it is expensive to own airplanes and to be compliant with all the regulations in aviation. The equity-ratio is somewhere between the values of Zalando and Tesla, but what really surprised me is the profit. I thought airlines don’t make a lot of profit, but the firm green roof tells me otherwise.

Finally USG people is able to generate a rather high revenue (somewhere between Zalando and Elecnor), without having a lot of money. Neither the equity nor the value for total assets is high. Of course they will hardly have any tangible assets and almost no stock. Most of their expenses will be related to people, so hardly any investment to be made (relatively speaking).

AnRep3D is the new company, founded after the handover of Scientassist (together with VRBI) to one of my sons. From now I will focus on three-dimensional graphs for the financial markets, showing the main figures from annual reports in comparison. As per 2021 a second product is available: EnRep3D. It is meant to visualise energy. Although the engine is the same, the texts, manual, website and examples (including blogposts) are focused at energy.
View all posts by AnRep3D →
This entry was posted in Visualising Financial Information and tagged 3D, airline, Annual Report, Bank, cargo, Companies, consultancy, Equity, freight, Fundamental Analysis, Industries, Liabilities, manufacturing, Profit, retail, Revenue, secondment, Spatial graph, Stock Market, temp agency, utilities, Virtual Reality, Visual Mining, Visualisation. Bookmark the permalink.