The last time I didn’t provide the readers with a real spatial graph, because it had not been uploaded yet. During the week after the post, I realised the full power of the AnRep3D generator – even if it’s abused for energy instead of money – needs more than just a single year. We already had eight countries for which we showed the usage of coal, oil, natural gas and non-fossil sources (renewables and nuclear combined). For every “building” in the graph the width represented the coal-consumption, the depth oil, the yellow part of the height the natural gas and the green part of the height the usage of non-fossil  sources. But in the end it was only a single row of eight buildings. However, energy usage is not static and AnRep3D allows us to show several rows of buildings, each row representing a single year for all the countries.

So instead of just showing last week’s graph, I collected a lot of additional data, for previous years. We already had 2014, but now 2004 and 1994 were added to cover two jumps of a decade. The last decade (2004 – 2014) covered the financial crisis, where the first one holds the millennium-boom. Interesting periods!

To start with, I will provide you with the original spatial graph through the links below. One is in text, the other is the picture of the graph itself. Remember, we divided the total consumption by the population, to obtain the individual usage for every source of energy. This allows us to compare large and small countries. The total consumption of energy will be the sum of width, depth and total height of the building, so not the volume!

This is the text-link to the original spatial graph on energy-usage per country (remember: WebGL should be enabled). Below a screenshot is presented.

This front-view presents the coal-usage per individual (width of the buildings), for the eight countries over three years – the most recent year in front. We already saw France and Italy are hardly using any coal, where the USA and the People’s Republic of China are using a lot. The relative contribution to its total energy-usage is higher for China, but the absolute amount of coal consumed per individual, is more or less the same for China and the USA!

Remember the spatial graph in your browser can be manipulated easily: clicking the right mouse-button, moving the mouse up and down will zoom the graph in and out. Clicking left and moving the mouse will tilt the graph in different directions (or move the observer’s viewpoint around a fixed graph). Double clicking in the graph translates it and moves the centre at the same time. As a result the way the graph tilts will change. Just try it. If you don’t know how to get the normal position back, refresh the graph.

If we fly up a little bit, we can observe the graph from above and in addition to the coal-values (width) now the oil-values  (depth) become clearer.

The individual oil-consumption is not very different for the inhabitants of EU-countries and the Russian federation. On the other hand, 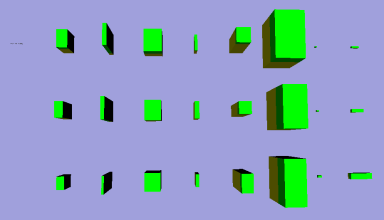 we can see people in the USA use about twice this amount individually, while China and India hardly use oil at all. The impression is even clearer with a real top-view.

Looking from aside, we can see the individual consumption of natural gas and non-fossil sources (nuclear, solar, wind, hydro and biomass). Now we can also see why France doesn’t need coal. The green part represents a lot of nuclear energy there! Italy doesn’t use a lot of coal either, but the green part is smaller and actually they banned nuclear energy long ago. So the increasing green part comes from other sources and biomass is growing throughout the years in Italy.

By the way: we placed 2014 in the front as the current consumption is more relevant than the historical values. Yet we can see the crisis had its impact and reduced the individual energy-consumption for a lot of countries. Especially the yellow height (so the usage of natural gas) decreased slightly between 2004 and 2014.

Interesting is the USA increasing its oil-usage (most likely the result of the shale-oil revolution) and the Russian Federation even more.

Finally, if we compare China to India, we see a huge difference. Although India’s energy-consumption increased, the population grew quicker and as a result the individual consumption decreased a little bit. The individual coal-consumption in India is much lower than in China. For the other fuels, like oil and natural gas the difference is not so impressive, but non-fossil is close (a lot of nuclear energy). Remember: the total usage is the sum of the three dimensions.

With this post we complete the series about energy – abusing our generator. The AnRep3D generator was meant to visualise data from Annual Reports, but other opportunities cannot be ignored!

For people who want to check the individual consumption of coal, oil, natural gas and non-fossils: have a look at my input-file. It was generated by Excel hence all the semicolons. The order is: country, year, natural gas+non-fossil, non-fossil, coal, oil (replacing company, year, revenue, profit, total assets, equity).

The sources used were mainly the iea.org for the energy and indexmundi.com for the population-sizes. For more information about the AnRep3D-generator itself, visit our website https://anrep3d.com

AnRep3D is the new company, founded after the handover of Scientassist (together with VRBI) to one of my sons. From now I will focus on three-dimensional graphs for the financial markets, showing the main figures from annual reports in comparison. As per 2021 a second product is available: EnRep3D. It is meant to visualise energy. Although the engine is the same, the texts, manual, website and examples (including blogposts) are focused at energy.
View all posts by AnRep3D →
This entry was posted in Visualising Financial Information and tagged 3D, Annual Report, Assets, China, climate, CO2, Coal, emissions, Energy, Energy transition, Equity, France, Germany, India, Liabilities, MMboe, Natural Gas, Nuclear, Oil, Oil&Gas, PetaJoule, Profit, Renewables, Revenue, Spatial graph, UK, USA, Virtual Reality, Visual Mining, Visualisation. Bookmark the permalink.