Visualising a mix of large companies in a spatial graph (II)

Picking up the subject where I left it last time, I have to convert all the numbers into the same currency. Otherwise we cannot compare the numbers in a spatial graph (nor in any other graph for that matter).  This time, it will be USD, so we have to convert EUR and GBP to USD. To be able to do so, I used http://www.macrotrends.net/ a very useful site! As revenue and profit will cover for the whole year, I had to derive an average exchange rate, whereas equity and assets are a snapshot at the end of the year, asking for an exchange rate at the end of the year as well. I applied:

One could argue the values chosen but this this blog is not science, it’s about showing the power of spatial graphs in financial analysis. So let’s move on.

Some values were a little bit odd (or even very odd, like for PSA and E.on) and therefore I double-checked the values. I found some typos, but the values which struck me as odd were alright. This means some strange things happened in the period between 2006 and 2016. One special event is known as the “financial crisis”, but other influences could apply as well, like divestments or mergers and acquisitions. My input-file looked like this:

Despite the double check: having a first look at the 3D-graph (clicking the screenshot below – or just looking at it), it really didn’t make sense!

It’s not some strange parallax or perspective. If we turn the graph 180 degrees it’s not very different (below). 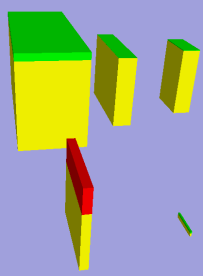 To understand what went on, I checked wikipedia and annual reports for other years. I will talk about E.on later,  but despite the crisis PSA (the Peugeot Citroën company) didn’t change that much. Looking for 2015 I got an annual report in South African Rand and I realised this was about another company. Yet, my numbers for 2016 were in euros and I didn’t expect another PSA to be active in Europe. On the other hand for a completely different industry it would be possible and since I only went for the income-statement and balance-sheet, I could have missed something. And I did! Asking for annual reports 2016 again, I noticed a “PSA International” just above the “Groupe PSA”. The former was a smaller fish-related company, but the latter was the one I looked for and it was all about cars indeed.

For E.on the 2015 numbers looked quite normal as well (I even checked a whole range of years), but then suddenly the 2015 numbers in the 2016 report were quite different from the original ones. After large divestments E.on became quite a different company in 2016. After correcting the PSA numbers the graph looks better. Next time I will talk about E.on and the other companies in more detail, using the new graph below (just click on the screenshot to have a look). For all companies we see the impact of the crisis, but the graph makes more sense now.

For more information about our generator for spatial (3D) graphs of annual reports, have a look at our website

AnRep3D is the new company, founded after the handover of Scientassist (together with VRBI) to one of my sons. From now I will focus on three-dimensional graphs for the financial markets, showing the main figures from annual reports in comparison. As per 2021 a second product is available: EnRep3D. It is meant to visualise energy. Although the engine is the same, the texts, manual, website and examples (including blogposts) are focused at energy.
View all posts by AnRep3D →
This entry was posted in Visualising Financial Information and tagged 3D, Assets, Companies, consultancy, Equity, France, freight, Fundamental Analysis, Germany, Industries, Liabilities, manufacturing, Profit, retail, Revenue, secondment, Spatial graph, Stock Market, UK, USA, utilities, Virtual Reality, Visual Mining, Visualisation. Bookmark the permalink.