Alternative usage of the AnRep3D-generator

A couple of months ago, I demonstrated the visualisation of the energy-mix of different countries and called it “abuse of AnRep3D”. Of course this wasn’t meant seriously, as every set of data can be visualised using AnRep3D. The name is derived from “Annual Report in 3D” as the original idea was related to financial information. However, there are no real boundaries to the data to be fed to the generator as it is completely agnostic.

Now, with the new version 4.1 available, offering a 3D legend as a part of the graph, it’s even easier to visualise alternative data-sets as the graph itself will tell what’s in it. To demonstrate the possibilities I decided to write this post about the energy-mix of different countries again. Only this time it’s called “alternative usage” and the graph will show a 3D-legend.  Actually I created two different graphs. Their legends are bots shown right below. Let me explain them afterwards. Double-clicking will present the real 3D-graph in your browser if JavaScript and WebGL are enabled.

(Remember:  To manipulate the graph there are several option. clicking the right mouse-button, moving the mouse up and down will zoom the graph in and out. Clicking left and moving the mouse will tilt the graph in different directions (or move the observer’s viewpoint around a fixed graph – it’s relative of course). Double clicking in the graph translates it and moves the centre at the same time. As a result the way the graph tilts will change. Just try it. If you don’t know how to get the normal position back, just refresh the graph.) 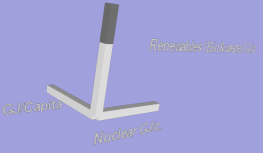 When it comes to energy-usage and its diferent sources, the International Energy Agency offers a wealth of data. Their site was renewed recently and I was able to have a look at the energy-mix of different countries. I decided to work with the TPES (Total Primary Energy Supply) as it reflects the real mix of fuels. The consumption includes large amounts of “electricity” and heat, being secundary sources or carriers (the same applies to e.g. Hydrogen).

Within Europe, the UK, Germany, France and Italy are important industrialised countries. Outside Europe we cannot ignore the USA, thePeople’s Republic of China and India. The latter three are large countries and of course this would mean a higher energy-consumption. The populations of China and India are over one billion each, but both are also “emerging”. To adjust the energy consumption to the number of inhabitants, I divided the total for the country by the size of the population.

The really interesting part is the ratio of fossil and nuclear energy and the share of “renewables”. We know that the height of the AnRep3D-buildings offers the possibility of a subsection (for financial purposes it’s the profit as a part of the revenue) but here we were allowed to split the renewables in the safe ones (solar, hydro, wind and geothermal energy) and the more dubious set called “biofuels and waste”. Cutting trees and selling them as wood-pellets is called “bio-fuel” and the same applies to ethanol and biodiesel, which can be derived from sources also suitable as food, like palm-oil. Although the second generation of biofuels causes less damage to the environment and society, it is good to visualise them separately. In previous posts I emphasised coal and of course we could have used the height for fossil, with the coal-section being represented by the green roof. We do have a 3D-legend, so probably it’s a good alternative for an upcoming post.

To show the change over time – with the most recent data available for 2015, I took the years 1995, 2005 and 2015. The resulting graphs present seven countries at three years (spanning two decades) with a “per capita” version in GJ (GigaJoule) and an a version at the country-level in PJ (PetaJoule, being one million GigaJoule). As the graph provides a relative comparison the shape of a single building (a country in one year) won’t change, but the relative size of the buildings will be different.

Everything was prepared in Excel and then the result was saved as a .csv-file. Because of this terrible Dutch tradition to use commas as a decimal separator automatically (providing a very weird graph!), I had to replace them all by decimal points using control-H. Fortunately in the .csv the real separator was a semicolon, so no confusion there.

The graphs are extremely rich in information. Screenshots can only represent one particular view, but it can be inspiring to do so. That’s why below a series of them are shown. Each one can be double-clicked to get the full graph presented in your web-browser. Several other screenshots – mainly from the “per capita” graph –  will be discussed in the next post. Right now I will focus on a very peculiar phenomenon: a building with a length, a height but no width at all!

The first screenshot is actually a combination of two. The width of the building represents nuclear energy and we can see France is quite good at it! Germany, despite of all the news about becoming free of nuclear energy, is reducing the amount but is certainly not yet zero! On the other hand Italy, more known for other things, is completely free of active nuclear power stations. As a result we can see the height (renewable energy) and the depth (fossil) of the building (right part of the picture), but there is no width at all (left part).

When we look from the top, there is a building in the oblique view but looking perpendicular to the floor, Italy becomes completely invisible.

That’s it for now. Of course you are invited to inspect the graphs yourself, using the instructions in the small print above. Please contact us at info@anrep3d.com  or have a look at our website https://anrep3d.com and download the free demo-package (no signing in required yet).