It seems like some people do not really understand what AnRep3D is, does and how it wil offer companies a competitive advantage. We cannot blame them, as the concept is very different from existing tools in the market. Sometimes the comment is that Excel already has 3D-graphs. Well, yes it can show bar-graphs in 3D, but still only the height of he bars is important. Such a graph looks nice yet no additional information is in it.

Photo by nastya_gepp on Pixabay

AnRep3D-graphs on the other hand are all about ratios as the height, width and depth are all determined by the input variables. Every single “building” has its own sizes in three dimensions and therefore it offers three ratios: height/width, height/depth and width/depth. Because all “buildings” in the chessboard-like pattern (or the Manhattan-map if you like) have their own set of ratios, the ratios can also be compared between the “buildings”. Since these buildings can represent e.g. companies in one direction and year or quarters in the other one, a lot of comparisons between ratios can be made. Ratios, ratios, ratios. Indeed AnRep3D is all about ratios!

Previously we put companies from different – or similar – industries together in one graph. Using the familiar RPEA-series for the input (Revenue, Profit, Equity and (Total) Assets) the ratios between these values can be compared between the companies, but also throughout the years or quarters. But… wait a moment! R-P-E-A is about four values and we only talked about Height, Width and Depth of the buildings. Indeed there is a fourth value shown in the graph as the buildings also can have a “roof”. The top-part of the building will be green, representing the profit-part of the revenue. Sometimes however, there is no profit. In case of a loss it will be added to the Revenue as a red “roof” on top of the revenue. 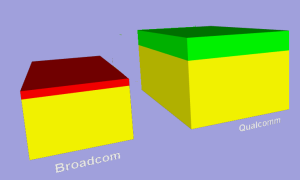 A very powerful instrument to interpret a lot of different values at a glance!

It turns out that similar industries have similar financial ratios as well when looking at equity, total assets and revenue – with profit and loss often fluctuating. 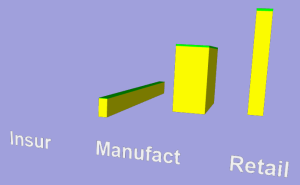 Comparing industries like manufacturing (automotive, machines, consumer goods), insurance and banking (no examples needed) or more service-oriented  companies (like temp agencies and retail) the difference is impressive! To the left a part of a graph, comparing very different industries is shown.

The overview of a series of automotive-companies from a previous post would be a good example of comparison within a specific industry.

Double-clicking the screenshot will open the 3D-graph in your browser. For maniputalion of this 3D-graph: Clicking the right mouse-button, moving the mouse up and down will zoom the graph in and out. Clicking left and moving the mouse will tilt the graph in different directions (or move the observer’s viewpoint around a fixed graph – it’s relative of course). Double clicking in the graph translates it and moves the centre at the same time. As a result the way the graph tilts will change. Just try it. If you don’t know how to get the normal position back, just refresh the graph.

How does one get an AnRep3D-graph? Well, that’s simple because that’s what the AnRep3D-generator does. It converts a structured set of numbers into such a graph with just a couple of mouse-clicks. Data like in the examples will be obtained from a series of annual reports, but to be honest: AnRep3D is rather agnostic. The manual is focusing on finance as it is our expertise, but we provided several examples of different applications in e.g. energy and agriculture (showing Coal, Oil, Natural Gas, Nuclear Energy, Renewables, CO2, minerals like Nitrate and Phosphate and so on – even for countries instead of companies). In the end the legend in front of the graph will tell what all the dimensions are representing.

The 3D-graph generator package can be downloaded without any charge. You don’t even have to give us your email-address.

Perhaps you’re not sure about the demo? Too much trouble to go through and still interested? We have videos on our yourtube-channel, showing all details of AnRep3D in pieces of a couple of minutes. Then there is our website and of course you can follow us on Twitter: @AnRep3D 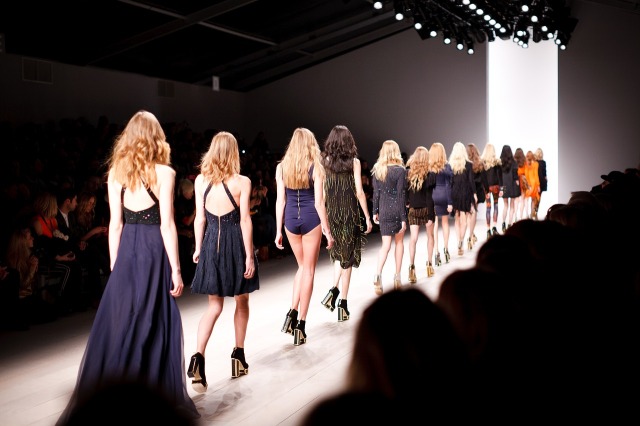 Photo by pexels on Pixabay

AnRep3D is the new company, founded after the handover of Scientassist (together with VRBI) to one of my sons. From now I will focus on three-dimensional graphs for the financial markets, showing the main figures from annual reports in comparison. As per 2021 a second product is available: EnRep3D. It is meant to visualise energy. Although the engine is the same, the texts, manual, website and examples (including blogposts) are focused at energy.
View all posts by AnRep3D →
This entry was posted in Visualising Financial Information and tagged 3D, Annual Report, Assets, Bank, CO2, Coal, Companies, Countries, Energy, Equity, finance, Financial Ratios, Fundamental Analysis, Industries, Liabilities, manufacturing, Natural Gas, Oil, Profit, Quarters, ratio, Renewables, retail, Revenue, Spatial graph, temp agency, Virtual Reality, Visual Mining, Visualisation, Years. Bookmark the permalink.