The world is changing quickly because of Corona. The production and sales of cars went down suddenly and the question is whether these companies will be surpassed by the tech giants – if it didn’t happen already. Our ranking is a bit outdated, but we couldn’t go with moving targets, so Toyota is still the next in line when looking at the revenue. Now the interesting part is that Toyota was not part of the Automotive-series we published earlier, so this will not repeat something already in there like we did for Volkswagen.

Photo by sasint on Pixabay

Toyota has a broken bookyear, ending at the end of the first quarter, but we will ignore for simplicity. Most mumbers in the annual reports are avaliable in both Yen and USG, so no need for conversion except 2018 where I could only get hold of amounts in yen.

I took historical exchange-rates from a site, but became suspicious when all dates showed the same rate, so I went to another site and converted the amounts again. As usual the balance is converted using the exchange-rate at the last day of reporting year (March 31, 2019) and for income-values the mid-year rate is taken (here: September 31, 2018).

Nothing spectacular comes up, apart from the lower profit in 2013. That’s the result of the crisis and quite normal. 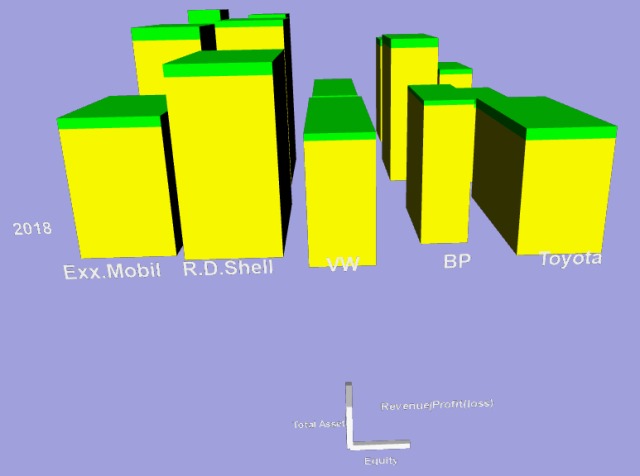 Double-clicking the screenshot will open the 3D-graph in your browser. For maniputalion of this 3D-graph: Clicking the right mouse-button and moving the mouse up and down at the same time, will zoom the graph in and out. Clicking left while moving the mouse will tilt the graph in different directions. Double clicking in the graph translates it and readjusts the centre at the same time. Just try it – If you don’t know how to get the normal position back, refresh the page in your browser.

The 2018 revenue is high and can be compared to Volkswagen’s and ExxonMobil’s. For now, Toyota will remain in the list of the world’s largest companies!

The good news is that next time it will be Apple’s turn. The largest tech-giant in the world, but what if we compare with the others, already in the 3D-graph?

AnRep3D is the new company, founded after the handover of Scientassist (together with VRBI) to one of my sons. From now I will focus on three-dimensional graphs for the financial markets, showing the main figures from annual reports in comparison. As per 2021 a second product is available: EnRep3D. It is meant to visualise energy. Although the engine is the same, the texts, manual, website and examples (including blogposts) are focused at energy.
View all posts by AnRep3D →
This entry was posted in Visualising Financial Information and tagged 3D, Annual Report, Assets, BP, Companies, ExxonMobil, Fundamental Analysis, Gearing, Germany, Industries, Japan, manufacturing, Profit, Revenue, Royal Dutch Shell, Shell, Spatial graph, Stock Market, Toyota, UK, USA, Virtual Reality, Visual Mining, Visualisation, Volkswagen. Bookmark the permalink.