We are nearly at the end of the series and this time we have another runner-up. Yet in the 3D-graph Microsoft looks much smaller than the oil-majors. It grew like the other tech companies did, but not as fast as Apple or Amazon. Its revenue is smaller than Aphabet’s. The 2018 revenue is also smaller than Amazon’s but at the same time Microsoft’s revenue is larger and so is the equity. And again, all roofs are green. It means none of the companies had a loss during one of the three years shown!

Photo by Ernesto Eslava on Pixabay

In the end we might think of Microsoft and the other tech giants as incredibly large companies, but the oil-majors are still much more impressive. The question is whether the growth-rate of the the former will remain unchanged and at the same time we know fossil fules will come to an end and the oi&gas-companies have to reinvent themselves. Will solar, wind, other renewables and carriers like hydrogen be at the heart of their business? Will such a transition be enough to remain among the largest companies in the world?

Double-clicking the screenshot will open the 3D-graph in your browser. For maniputalion of this 3D-graph: Clicking the right mouse-button and moving the mouse up and down at the same time, will zoom the graph in and out.

Beware: the graph haw so many companies that zooming out first is necessary to see the whole picture! Clicking left while moving the mouse will tilt the graph in different directions. Double clicking in the graph translates it and readjusts the centre at the same time. Just try it – If you don’t know how to get the normal position back, refresh the page in your browser.

In the end the question is more like “will data be the new oil or will energy remain number one?” We know data-centres use a lot of energy, so the tech-giants might support the energy-companies at the same time. If new regulations come in for tech-companies, like we have seen for the financial sector, things might be very different.

For Microsoft it’s fun to see where it comes from.  The company has been around  for a while and I found a link showing the numbers for the nineties of the last century. The picture below shows a screenshot. 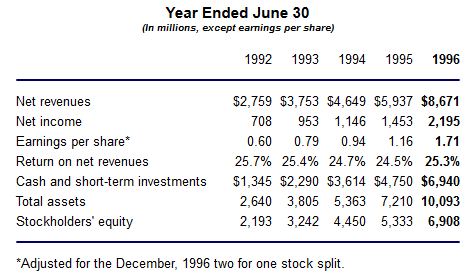